LiPo batteries (short for Lithium Polymer) are a type of rechargeable battery that has taken the electric RC world by storm, especially for planes, helicopters and multicopters. Some say that they are the main reason electric flight is now a very viable option over fuel powered models. When compared to their old NiCd/NiHm counterparts, RC LiPo batteries have three main things going for them that make them the perfect battery choice for RC flight:

There are a few down sides with RC LiPo batteries:

Other than the smallest of electric RC models, RC LiPo battery packs will have at least two or more cells hooked up in series to provide higher voltages. For larger RC models that number can be as high as 6 cells and even more for larger birds or HV (high voltage) applications.

Here is a list of LiPo RC battery pack voltages with cell counts most beginners will be using:

If you are wondering what the number in parenthesis means, it is a way the battery manufactures indicate how my cells hooked in series “S” the battery pack contains.

Capacity indicates how much power the battery pack can hold and is indicated in milliamp hours (mAh). This is a way of showing how much load or drain (measured in milliamps) can be put on the battery for 1 hour at which time the battery will be fully discharged.

As you can see, for a RC model with that kind of current draw, it would be very advantageous to use a larger capacity battery pack such as a 2000 mAh pack or even higher. This larger pack used with a 15 amp draw would double the time to about 8 minute till the pack was discharged.

The main thing to get out of this is if you want more running time; increase the capacity of your battery pack. Unlike voltage, capacity can be changed around to give you more or less running time. Of course because of size restrictions and weight you have to stay within a certain battery capacity range seeing that the more capacity a battery pack has, the larger and heavier it will be.

This is probably the single most over rated and miss understood of all battery ratings. Discharge rate is simply how fast a battery can be discharged safely. The faster the ions can flow from anode to cathode in a battery will indicate the discharge rate. In the RC LiPo battery world it is called the “C” rating.

Most RC LiPo Battery packs will show the continuous C rating and some also indicating a burst rating as well. The burst rating indicates the battery discharge rate for short bursts of extended power. An example might be something like “Discharge rate = 20C Continuous / 40C Bursts”.

The higher the “C” rating, usually the more expensive the battery. Depending on what application you are using the battery for this is where you could save some money by understanding all the ratings on a LiPo battery. Getting a high discharge rated pack when there is no way you could possibly pull the full amount of power is not required, but it won't hurt either. The most important thing is you can't go with too low a discharge “C” rating or you will damage your battery and possibly you’re ESC (Electronic Speed Control).

So how do you know what “C” rating to get when purchasing your LiPo RC Battery Pack? The easy answer most will give is to get the largest C rating you can. This advice is fine if money is not an object, but for most folks, especially beginners and intermediate RC enthusiasts stretching your RC battery budget by purchasing lower “C” rated packs so you can get a few extra packs makes much more sense.

Spending $100 on 30c 5000 mAh LiPo may be a little over the top if all you are using it for is running a stock motor or bashing around the back yard. Understanding these ratings will ensure you get the best LiPo battery for your needs and ultimately saving you money and possible headaches.

All this said, RC LiPo packs are coming down in price all the time. If you find a 30C pack for the same price as a 20C (when that is all you need), go for the 30C pack. It will run cooler and most likely last a little longer. Like most things, pushing a LiPo pack hard close to its limits will wear it out and reduce its lifespan. Having wiggle room on the high side will ensure that this won't happen.

Lastly feel or take a temperature reading of your packs after running them. Sometimes just because a pack says it is rated at 20C doesn't necessary mean it is in real world applications since nothing runs at 100% efficiency. On top of that, as packs age the internal resistance gets higher making them run warmer. The general rule is if you can't comfortably hold a LiPo pack tightly in your hand after using it, it's too hot. This equates to anything higher than about 60C. But the general rule of thumb amongst hobby enthusiasts is no higher than 50C is safe. Therefore if you find your packs are getting warmer than this, it's a good bet you should consider moving up to a higher discharge rating for your next LiPo pack.

A 3.7 volt RC LiPo battery cell is 100% charged when it reaches 4.2 volts. Charging it past that will destroy the battery cell and possibly cause it to catch fire. This is very important to note and keep in mind at all times. A computerized charger will stop the charge process when the battery reaches 4.2 per cell. A balanced computerized charger will do this for each individual cell.

It is critical that you use a charger specified for Li-Po batteries and select the correct voltage or cell count when charging your RC LiPo batteries if you are using a computerized charger. If you have a 2 cell (2S) pack you must select 7.4 volts or 2 cells on your charger. If you selected 11.1V (a 3S pack) by mistake and tried to charge your 2S pack, the pack will be destroyed and most likely catch fire.

Selecting the correct charge current is also critical when charging RC LiPo battery packs. The golden rule here has traditionally been to "never charge a LiPo or Li-Ion pack greater than 1 times its capacity (1C)”. For example a 2000 mAh pack, would be charged at a maximum charge current of 2000 mA or 2.0 amps.

But times have changing and most battery manufacturers specify their own charging “C” current. With most LiPo experts feeling that you can safely charge at a 2C or even 3C rate on quality packs that have a discharge rating of at least 20C or more, with little effect on the overall life expectancy of the pack as long as you have a good charger with a good balancing system.

Once again, the three main things that shorten LiPo battery life are:

Well what would happen if one of those three cells is charging a bit faster than the other two? There could be two cells at only 4.1 volts and the one that is charging at bit faster could be getting overcharged up to 4.4 volts before the charger stops charging at 12.6 volts. That would ultimately damage to that one cell and even perhaps catch on fire. This is an extreme example and that kind of voltage difference between cells is unlikely with a healthy pack, but even a 0.1 (100 mV) voltage difference between cells can cause issues and damage over time.

On the other end of the spectrum is if there is one cell in the pack that is not reaching full charge when the pack is charged and then gets discharged below 3.0 volts (even though the 3 cell battery pack is indicating a voltage of 9 volts or higher), this can cause you problems too.

Balancing ensures all cells are always within about 0.01-0.03 volts per cell. This means that over charging or discharging of one or more cells won’t ruin your battery pack, or worse become a safety issue from overcharging a cell.

This can be done either by having a cell balancer work alongside your charger or by using a computerized charger with built in balance function.

How this works is that the charger (or balancer) will check each cell in a LiPo battery pack as it is charging/ discharging and adjust the voltage so they charge/discharge equally and end with the same voltage. I.e. each cell in a 3 cell pack would be 4.2 volts, totaling 12.6 volts. Instead of one cell charging to say 4.15, another 4.2 and the third 4.25, still totaling 12.6 volts. As far as the (conventional non balance) charger is concerned it has reached the cutoff voltage of 12.6 volts and it is done. But what you don’t know is that it is damaging your packs every time it is charging and discharging.

A balance connector is nothing more than a breakout connector for accessing all the individual cells contained in a LiPo. This allows for the monitoring and manipulation of each cell individually.

Charging through the balance connector

This can be done going cell by cell.

Heat and LiPo’s are usually a bad combination, sometimes very very bad. Resulting in explosions or fire. There are plenty of videos on YouTube with LiPo packs exploding and releasing toxic gases. You should always look after you pack. Charge them in suitable condition and never over charge over discharge or allow them to heat up. Using a good computerized charger with a temperature probe and temperature cutoff settings is a good way to monitor your battery packs temperature as well.

Another good rule to follow is the "80% rule". This simply means that you should never discharge a LiPo pack down past 80% of its capacity to be safe. For example, if you have a 2000 mAh LiPo pack, you should never draw more than 1600 mAh out of the pack (80% x 2000). This is assuming a healthy pack as well that has the full 2000 mAh capacity (as packs age, their capacity drops). This again is where computerized chargers pay for themselves many times over so you can see how much capacity the battery takes allowing you to adjust your running times accordingly to stay within that 80% rule to get the most life out of your pack. 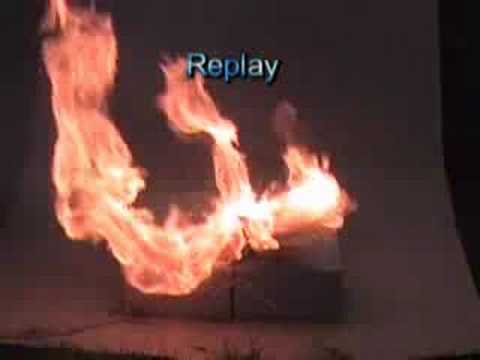